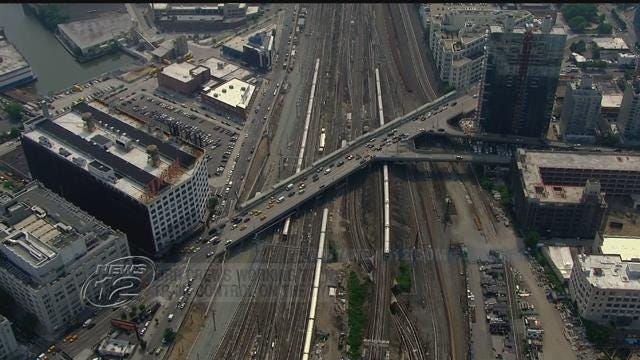 The Long Island Rail Road this weekend began installing Positive Train Control, technology that can help avoid future disasters in emergency situations.
PTC is a computer-controlled system that can slow or stop a train during an emergency. The railroad started its implementation on the Oyster Bay line.
"They've been talking about it for a long time and I'm glad to see it being implemented," said Peter Haynes, of the LIRR Commuters Campaign. "They can't do it fast enough."
Haynes says the new technology will improve service and efficiency. He says it would have also prevented deadly accidents, like the 2016 NJ Transit train crash that killed one woman standing at the station platform, the 2015 Amtrak crash in Philadelphia that killed eight people, and the 2013 crash in the Bronx that killed four people.
MTA officials say PTC involves a complex system of GPS satellites and ground-sensor data installed on the tracks and on trains that communicate with each other to automatically slow down or stop a train if it's going too fast, or is about to hit another train.
Installing the technology on LIRR and Metro-North railroads will be paid for with a nearly $1 billion federal loan. The MTA insists the cost will not affect fares.
The LIRR has to finish installing the PTC technology by the federal deadline of December 2018 or face fines of up to $25,000 a day.
LIRR customers are urged to check their schedules along the Oyster Bay branch while the installation process is completed.
Related Stories

LI's Balin back in PGA Championship