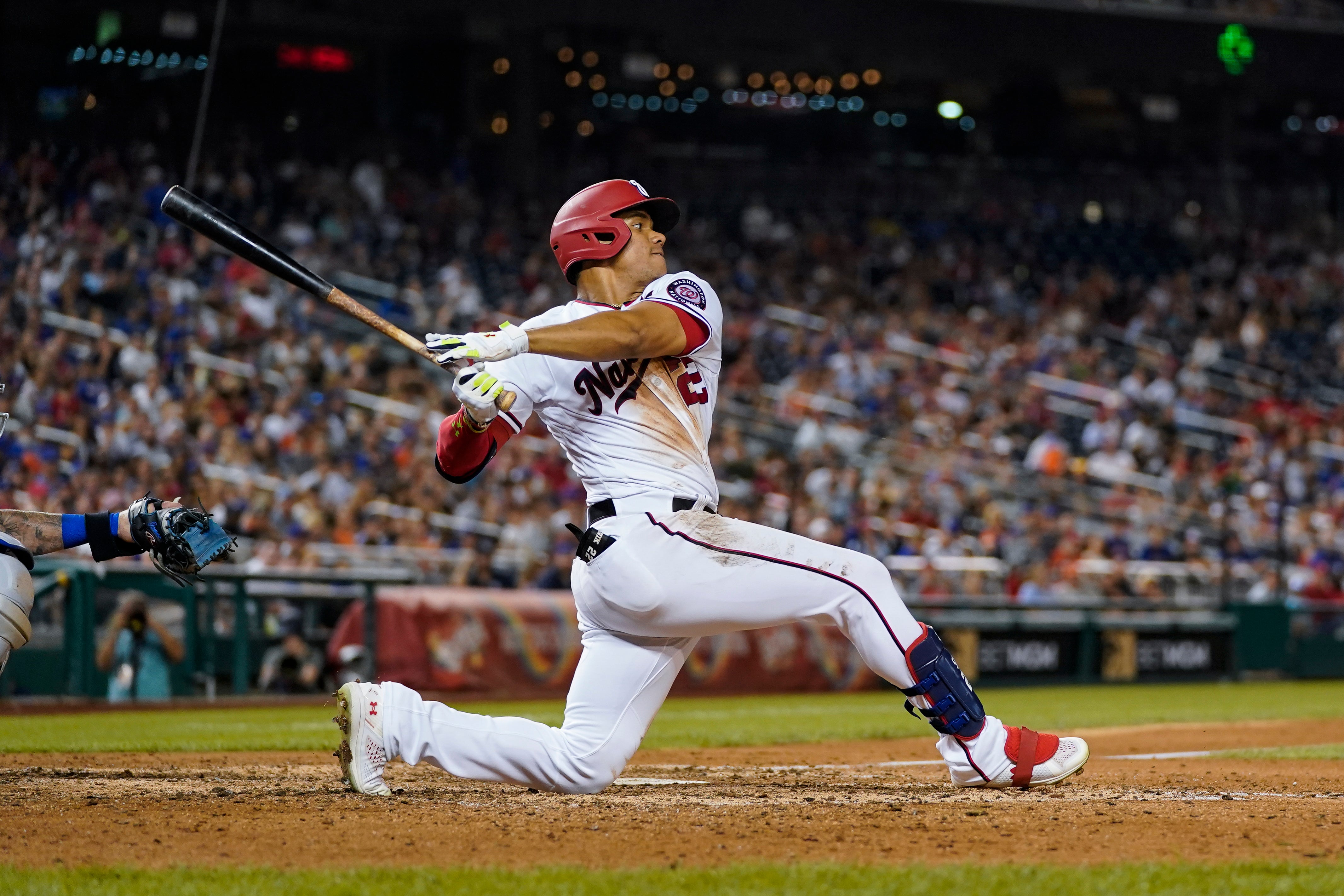 The San Diego Padres acquired superstar outfielder Juan Soto from the Washington Nationals on Tuesday in one of baseball's biggest deals at the trade deadline, vaulting their postseason chances by adding one of the game's best young hitters.
The Padres also obtained first baseman Josh Bell while sending a haul of players to Washington that included rookie left-hander MacKenzie Gore, first baseman/DH Luke Voit and prospects James Wood, C.J. Abrams, Robert Hassell III and Jarlin Susana.
Voit was a late addition to the deal after San Diego first baseman Eric Hosmer declined to waive a no-trade provision, according to a person with direct knowledge of the move who spoke to the AP on condition of anonymity because negotiations were ongoing at the time.
Soto is a generational talent who turns 24 in late October, when the Padres hope hope to still be playing for a title.
After contributing to the Nationals’ first championship in franchise history in 2019, Soto hit .351 in 2020 to win the NL batting title. He has been walked more than any other player in major league baseball over the past two seasons.
“The atmosphere here is they want to win, and not just go to the playoffs but win a World Series,” said All-Star closer Josh Hader, who was obtained by San Diego on Monday in another big deal with Milwaukee. “That's a contagious atmosphere to be a part of.”
San Diego began the season with a luxury tax payroll of $229.3 million, just below the first threshold, and the trades push the Padres into tax territory for the second straight season. Soto is owed $5,978,022 for the rest of this season and Bell $3,516,844.
The package of prospects going to Washington is one of the most touted groups ever involved in one deal. Gore and Abrams debuted in San Diego this season after ranking among the sport's elite minor leaguers, Hassell and Wood are both Top 100 prospects according to MLB.com, and Susana was considered the best pitcher available in the 2021-22 international free agent class.
Washington general manager Mike Rizzo set a lofty asking price last month after reports emerged that Soto turned down the team’s latest contract offer of $440 million over 15 years.
Soto remains under team control for two more seasons after this one, which made it no sure thing the Nationals would trade him now. The Padres getting him for potentially three playoff runs even absent a new deal made this the peak of Soto’s value.
That uncertainty began weighing on Soto, who said after Sunday’s game against St. Louis: “I just want to get it over with and see what’s going to happen. Start over here or wherever I’m at.”
He gets to start over in San Diego in the midst of his second All-Star season, part of a loaded lineup that also includes All-Star Manny Machado and Fernando Tatis Jr. when the shortstop returns from a broken left wrist.
“It's pretty impressive to have those three types of guys on one team in the same lineup,” said Wil Myers, the Padres' longest-tenured player. “Excited to see that trio, hopefully in the next week or two.”
Tatis could be 10 days to two weeks away from being added to the active roster.
With little protection around him in Washington’s lineup, Soto hit .246 with 20 home runs and 45 RBIs and 91 walks in 101 games.
In 2,435 plate appearances since making his Nationals debut in 2018, Soto is batting .291 with 118 home runs and 357 RBIs. He’s only a couple of years removed from slugging .695 with a 1.185 OPS and .490 on-base percentage - all NL bests.
Soto becomes the latest Nationals player to be traded as part of the organization’s long-term rebuild and with ownership looking to sell the team. Rizzo traded shortstop Trea Turner, ace Max Scherzer, power hitter Kyle Schwarber and five others at the deadline last year, and Washington has let Bryce Harper, Anthony Rendon and others move on in free agency.
The quintet of young players coming from San Diego could join the ones acquired last year - including pitcher Josiah Gray and catcher Keibert Ruiz - as the core of Washington's next contender.
Gore, a 23-year-old left-handed pitcher, had a 1.50 ERA through his first nine starts this year but is now on the injured list with elbow inflammation. Abrams struggled as a fill-in for injured Tatis at shortstop to begin the season, but he's only 21 and has hit .314 at Triple-A.
The 20-year-old Hassell, the No. 8 overall pick in the 2020 amateur draft, hit an RBI single in last month’s All-Star Futures Game. Wood, a 19-year-old outfielder and second-round selection in last year’s draft, is batting .321 with 10 homers and 45 RBIs for Class-A Lake Elsinore. Susana, an 18-year-old right-hander, has a 2.45 ERA with 44 strikeouts in 29 1/3 innings with San Diego's complex league team.
___
Whyno reported from Washington.
___
More AP MLB: https://apnews.com/tag/MLB and https://twitter.com/AP_Sports
(Copyright 2022 The Associated Press. All rights reserved. This material may not be published, broadcast, rewritten or redistributed without permission.)
8/2/2022 4:20:55 PM (GMT -4:00)
Related Stories