Staff Picks: The Who perform at Jones Beach 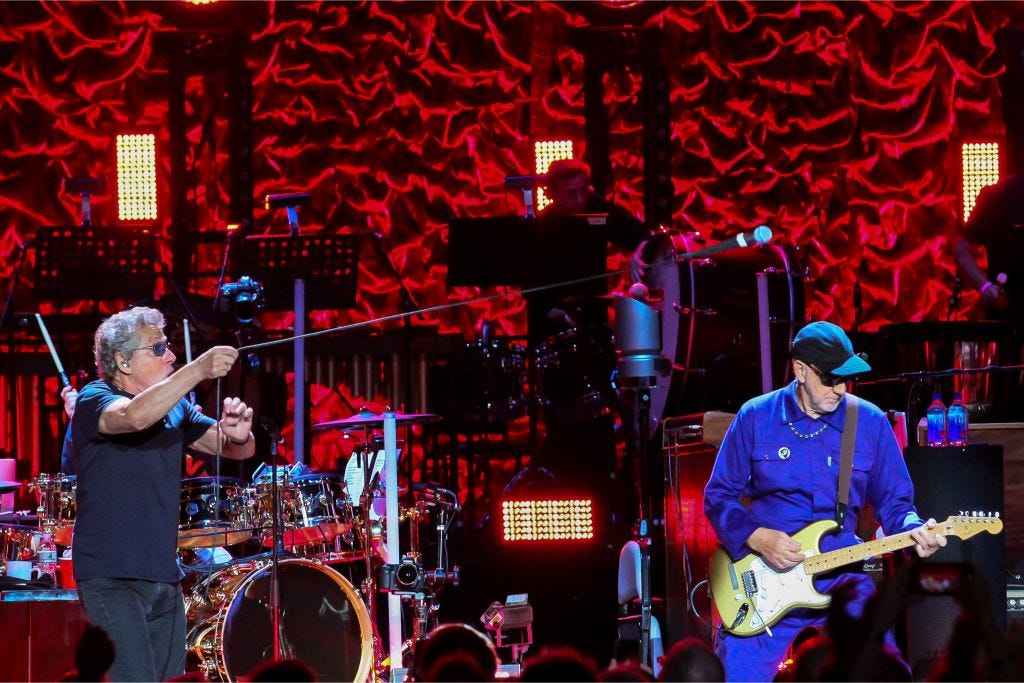 By Lee Danuff/News 12  Digital
It was a lovely night to see a concert at Jones Beach Sunday, but unfortunately, for The Who, the tech gods put up quite a bit of a fight.
The band performed to a sold-out crowd Sunday evening during the Moving On! tour, accompanied by a 48-piece orchestra led by conductor Keith Levenson.
There were big chords, as well as beautiful string arrangements, but the band encountered some sound difficulties during the first set. The sound cut off after “Imagine A Man” and again for “Hero Ground Zero.”  Daltrey tried to talk to the audience on his mic, but no one could hear him.  The giant screens on either side of the stage were also either shut off or had technical issues as well. The band then walked off the stage until the issues were fixed.
When The Who came back, Townshend jokingly told the audience that he wasn’t in particularly good form, so it was best that the sound cut off.
Despite the difficulties, Townshend and Daltrey sounded strong, delivering mega hits from across their 50-plus careers – starting with a fully orchestral “Tommy.”
The band took a break from the orchestra for five songs, which included “Behind Blue Eyes” and a beautiful acoustic version of “We Won’t Get Fooled Again.”
Townshend, dressed a late ‘60s trademark worker’s jumpsuit, with a button of Meher Baba pinned to his chest, performed his signature windmills, with a voice that sounded strong and clear.  Daltrey, dressed in all back with blue glasses, was in great form, throwing his microphone around the stage as he sang crowd favorites.
The accompanying band was also in good form Sunday evening, featuring guitarist/backup singer Simon Townshend, keyboardist Loren Gold, bassist Jon Button and drummer Zak Starkey.
Starkey, son of Beatles drummer Ringo Star, rocked his electronic drum kit, and Gold did a beautiful piano intro before “Love Reign O'er Me.”
Katie Jacoby put a special touch on the band’s last song, “Baba O’Reilly,” with an awesome violin solo.
If you’re looking to hear more from The Who, Townshend announced that the band’s latest album, entitled “Who,” will be out in November. He also announced that his brother/guitarist Simon Townshend wrote a song for the new album.
SPOILER ALERT: See below for the setlist at Jones Beach
With Orchestra
Overture
1921
Amazing Journey
Sparks
Pinball Wizard
We're Not Gonna Take It
Who Are You
Eminence Front
Imagine a Man
Hero Ground Zero
Band only
The Kids Are Alright
I Can See for Miles
You Better You Bet
Won't Get Fooled again
Behind Blue Eyes
With Orchestra
Ball and Chain
The Real Me
I'm One
5:15
Love Reign O'er Me
Baba O'Riley
How much do you REALLY know about The Who? Take this quiz and see how much you know.
Pop Quiz - How much do you know about The Who?