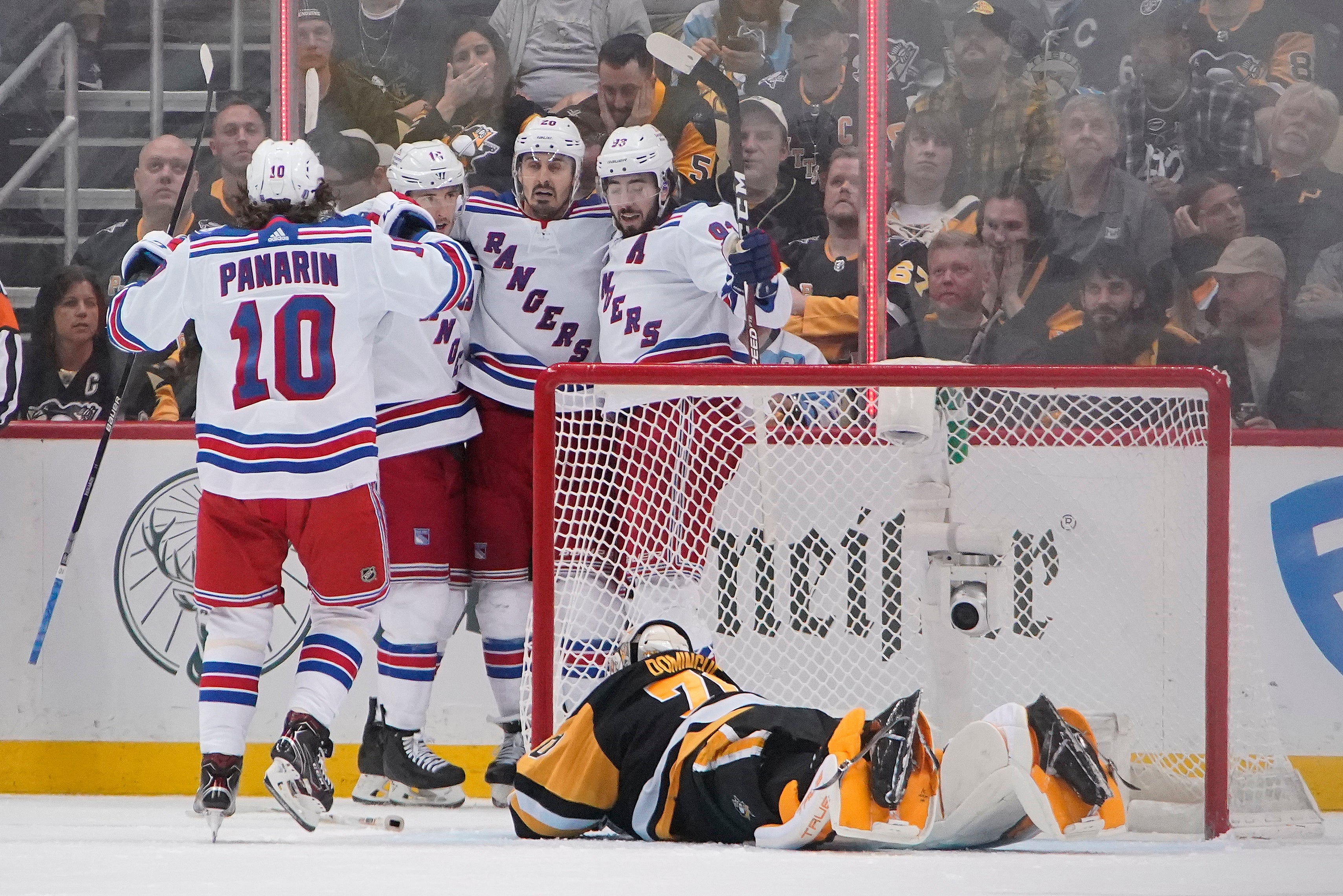 Chris Kreider's long slap shot bounced over Louis Domingue and into the net with 1:28 left and the New York Rangers beat the Pittsburgh Penguins 5-3 on Friday night to push their thrilling first-round series to a deciding Game 7.
Kreider's second of the game and fourth of the playoffs sent the series back to New York. Andrew Copp added an empty netter for good measure in the waning seconds. Game 7 is Sunday at Madison Square Garden.
Mike Zibanejad had two goals and two assists and Adam Fox had four assists. Igor Shesterkin stopped 31 shots to win at PPG Paints Arena for the first time this series after getting chased by Pittsburgh in Games 3 and 4.
Bryan Rust, Evgeni Malkin and Jeff Carter scored for Pittsburgh. Domingue, who has become a local folk hero while filling in for injured Tristan Jarry and Casey DeSmith, made 33 saves but couldn't get a handle on Kreider's shot, which seemed to hit him high then popped up into the air and behind him before rolling into the net.
Pittsburgh played without captain Sidney Crosby, who sat out while dealing with an upper-body injury. His status going forward is uncertain.
For most of the early going in Game 6, it seemed the Penguins would find a way to advance without him.
The Penguins throttled Shesterkin in Games 3 and 4, ending his night early in relatively easy wins. The chants of “IIIIIIGOOORRRRR” started before the opening puck dropped, and the roars only grew more incessant after Pittsburgh scored twice in the first period to take a quick lead.
Carter used his 6-foot-3 frame to stretch for a backhand tap in front of the net that slipped by Shesterkin 14:12 into the first, the 18-year veteran's eight goals in 12 career playoff games since joining Pittsburgh at the 2021 trade deadline.
Rust, as close to a “closer” as there is for the Penguins then made it 2-0 just over 90 seconds later when he blasted home a one-timer off a cross-ice feed from Jake Guentzel. The score marked the 11th goal for Rust in a clinching or elimination game since making his postseason debut in 2016.
Pittsburgh, however, has struggled at times to maintain momentum after building a multiple-goal advantage. A three-goal lead disappeared in Game 3, though the Penguins recovered to win going away. A two-goal lead vanished in New York in Game 5.
It was much of the same in Game 6. This time, it was Zibanejad who led the charge. He scored twice in a span of 76 seconds to tie things up. The first came just 5 seconds after Pittsburgh's Evan Rodrigues was called for roughing New York's Ryan Lindgren after taking exception to a hit along the boards. Zibanejad blasted home a one-timer from the right circle to give New York a much-needed jolt.
Zibanejad then pulled the Rangers even 1:16 later with another laser, this one from just above the right circle. Kreider gave the Rangers the lead 13:48 into the second by jamming home a rebound off a shot by Zibanejad, with Shesterkin also getting an assist on the play.
Just as they did in Game 5, the Penguins responded as Malkin extended his stick to intercept a pass at the Pittsburgh blue line. The Russian star then beat New York defenseman K'Andre Miller to the puck before flicking a wrist shot by Shesterkin for his 68th career playoff goal.
This one set up another taut finish in a series that began with a triple-overtime classic in Game 1 and is now set up for a memorable deciding game back at the Garden.
Related Stories

Hurricanes approach for round 2 playoff matchup vs. the Rangers

Detention of WNBA's Griner in Moscow extended for 1 month

Hurricanes approach for round 2 playoff matchup vs. the Rangers