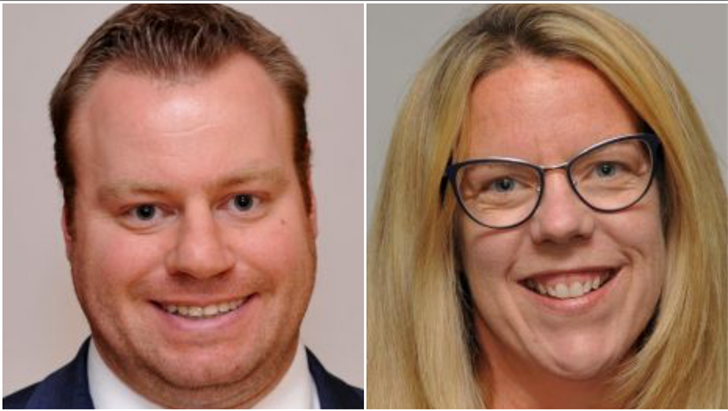 Flood, 35, of Setauket, is running on the Republican and Conservative party lines. He is chief of staff to Assemb. Dean Murray and has a general law practice in Port Jefferson. He grew up in Port Jefferson, graduated from St. Joseph’s College in 2007 with a bachelor’s degree in political science and received a law degree from Western New England University School of Law in 2010. He worked for a Manhattan corporate law firm before opening his private practice in 2012. A member of the Port Jefferson Chamber of Commerce, he is married and has four children.
Flood blamed county mismanagement and a lack of legislative oversight on spending for the county’s poor fiscal situation. “If we keep on going with reckless spending, our county will become more unaffordable,” he said, pointing to rising fees and taxes. As a Suffolk lawmaker, he would provide more agressive oversight of county spending, including management hires in County Executive Steve Bellone’s office and contracts for solar panels in parking lots and red light cameras. He said the county comptroller’s office could use more auditors to root out fraud and waste. With his contacts in state government, Flood said he also would work to relieve state mandates. Flood supports the effort to bring a drag racing strip to Long Island, which he said would generate sales tax revenue.
http://longisland.news12.com/global/vendor/frankly/next-gen-videoplayer.html?clipid=13849300&affname=news12li&playerdivid=next-gen-videoplayer-13849300&width=auto&height=auto&baseurl=longisland.news12.com
Hahn, 46, is running on the Democratic, Working Families, Independence, and Women’s Equality party lines. The Setauket resident received a bachelor’s degree in psychology from the University of Delaware and master’s degree in social work policy from the University of Pennsylvania. Hahn has been a Suffolk County legislator in the 5th District since 2012. Previously, she worked as director of communications for then-Presiding Officer William J. Lindsay, and also chief of staff for Suffolk Legis. Vivian Viloria-Fisher. She had previously worked for Melville-based technology company NEC USA Inc. Hahn is chairwoman of the environment, planning and agriculture committee, as well as the parks committee. She is married, with two daughters.
Hahn said the top issues are the environment, combating the opioid epidemic and attracting high-paying jobs to Suffolk. As chair of the environment committee, she passed a bill to require the county to test drinking water for the chemical 1,4-dioxane and banned the use of plastic microbeads in personal care products. She also passed legislation to prevent dry cleaners from describing themselves as “organic” and directing the county health department to come up with signs on health effects of different dry cleaning chemicals. She plans to encourage coaches, parents and others who work with children in how to use naloxone, a drug that counters the effects of an opioid overdose. On economic development, she said she and other lawmakers have brought together Suffolk County Community College and Stony Brook University to better train the workforce.
http://longisland.news12.com/global/vendor/frankly/next-gen-videoplayer.html?clipid=13830377&affname=news12li&playerdivid=next-gen-videoplayer-13830377&width=auto&height=auto&baseurl=longisland.news12.com
Return to Voters Guide