What's behind the baby formula shortage? Here's a look at the problem. 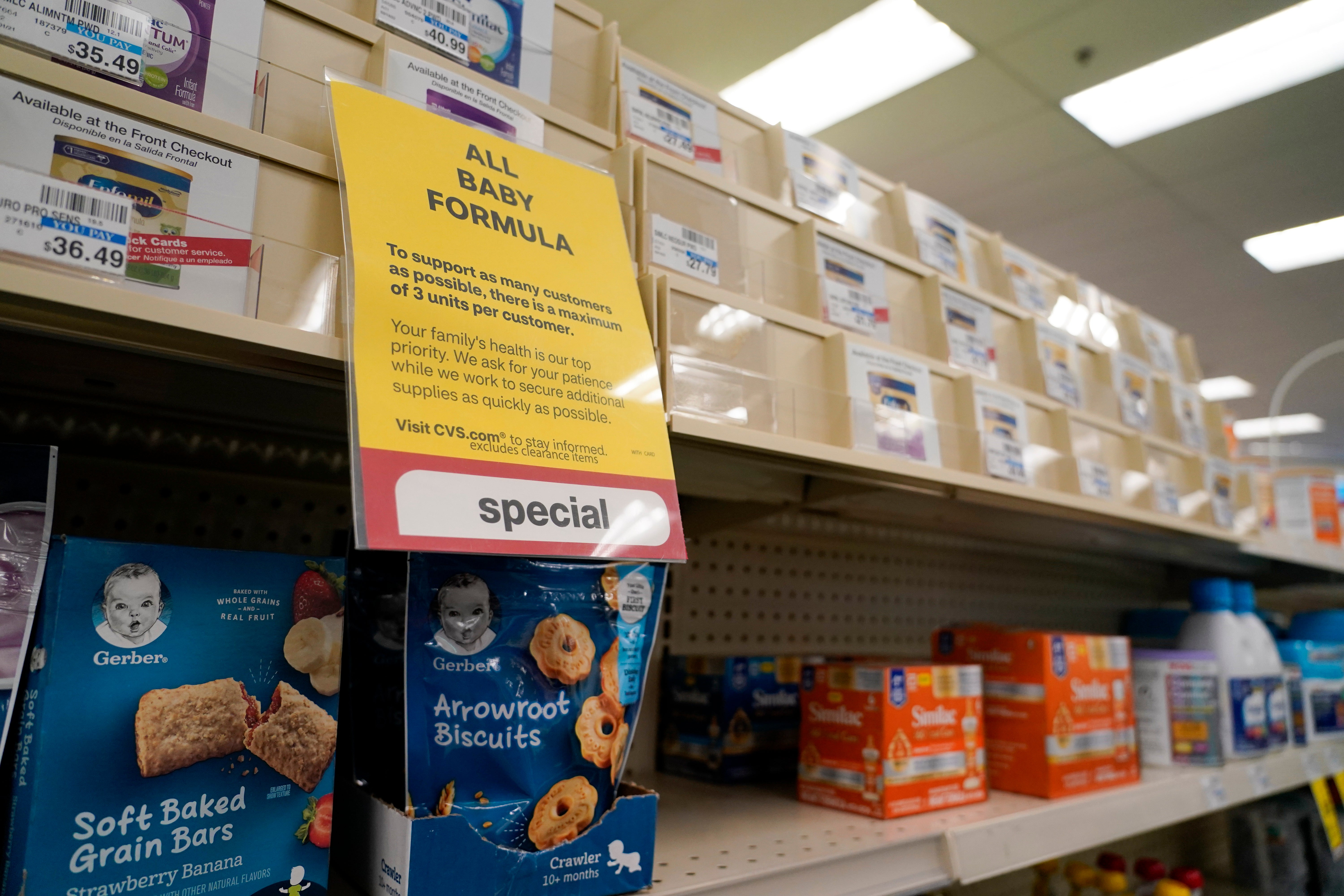 Many parents are hunting for infant formula after a combination of short- and long-term problems hit most of the biggest U.S. brands.
Millions of babies in the U.S. rely on formula, which is the only source of nutrition recommended for infants who aren't exclusively breastfed.
Here's a look at what's behind the problem and what parents can do:

WHY IS THERE A SHORTAGE?

Ongoing supply disruptions have combined with a recent safety recall to squeeze supplies.
The problems began last year as the COVID-19 pandemic led to disruptions in labor, transportation and raw materials - economy-wide issues that didn't spare the formula industry. Inventory was further squeezed by parents stockpiling during COVID-19 lockdowns.
Then in February, Abbott Nutrition recalled several major brands of powdered formula and shut down its Sturgis, Michigan, factory when federal officials began investigating four babies who suffered bacterial infections after consuming formula from the facility.
Abbott is one of only a handful of companies that produce the vast majority of the U.S. formula supply, so their recall wiped out a large segment of the market.

WHAT IS IN BABY FORMULA?

Most formulas are made from protein from cow's milk that's been altered to be easier to digest and enhanced with extra nutrients babies need for growth and development. The Food and Drug Administration sets specific nutritional requirements, including minimum amounts of protein, fat, calcium and a number of vitamins. Formula makers achieve these levels by adding various sugars, oils and minerals.
The formulas are designed to mimic breast milk, though studies have repeatedly shown better health for babies who are breastfed.

WHY CAN'T ALL MOTHERS RELY ON BREAST MILK?

Health professionals recommend exclusively breastfeeding babies until they are 6 months old. But federal figures show that only 1 in 4 are relying solely on breast milk at that age.
Mothers face a number of challenges to long-term breastfeeding, including returning to work and finding the time and equipment needed to pump breast milk. About 60% of mothers stop breastfeeding sooner than they had planned, according to the Centers for Disease Control and Prevention.
State and federal laws have been enacted to encourage breastfeeding by requiring break time and accommodations for mothers of infants.
Rates of breastfeeding have consistently been lower among Black babies than other groups. About three quarters of Black babies ever are breast fed, below the national average of 84%, according to the CDC.

WHAT SHOULD PARENTS DO IF THEY ARE HAVING TROUBLE FINDING FORMULA?

Talk with your pediatrician or call a local food bank to see if they can help locate some options. Experts also recommend checking with smaller stores and pharmacies, which may still have supplies when larger stores run out.
Most regular baby formulas contain the same basic ingredients and nutrients, so parents shouldn't hesitate to buy a different brand if they're having trouble finding their regular one.
Some infants require specialty formulas due to allergies, digestive problems and other medical conditions. Parents should talk to their doctor if they can’t find those products, which manufacturers usually distribute through pharmacies and clinics.
Low-income families that qualify for WIC - a federal program similar to food stamps that serves mothers and children - can also contact their local agency.
Health officials also warn against buying formula via social media websites or outside of conventional retailers because they could be counterfeit.
MORE: Authorities are warning against price gouging of baby formula. Here’s what to do if you suspect overcharging.

WHY ARE PARENTS TOLD NOT TO USE MAKE-YOUR-OWN FORMULA RECIPES ONLINE?

Many do-it-yourself formula recipes are made from cow’s milk and granular sugar that may be difficult for young babies to digest. They also lack the specific vitamins and proteins found in breastmilk and FDA-approved formulas that are needed for basic nutrition.
“Particularly for small babies, many of these formulas and mixtures that are found online don’t contain even the most basic nutrient mixes that babies need to survive,” said Dr. Steven Abrams, a pediatricians at the University of Texas, Austin.
Abrams also stressed that parents should never dilute infant formula.

WHEN ARE SUPPLIES LIKELY TO IMPROVE?

Health regulators recently announced several steps designed to boost supply, including allowing faster importation of certain foreign brands.
The FDA is working with Abbott to try and fix the violations that triggered the shutdown of its Michigan plant, which produces Similac, EleCare and several other leading brands.
The Chicago-based company said this week that, pending FDA approval, it could restart manufacturing at its plant within two weeks. After that it would take another six to eight weeks before new products hit store shelves.
But even then, experts caution that many of the industrywide issues will continue to restrain supplies.
“This is going to be problem and it's not going away for at least a period of several months,” Abrams said.
Related Stories

The Real Deal: How to save on game day entertainment

Wondering when to get the flu vaccine? The CDC has some recommendations

Guide: How to dispose of prescription medicines in Connecticut, New Jersey and New York

Health department reports more than 3,700 COVID-19 cases over the past week

The Real Deal: Looking to save on cosmetics? Here's how not to waste what you buy.