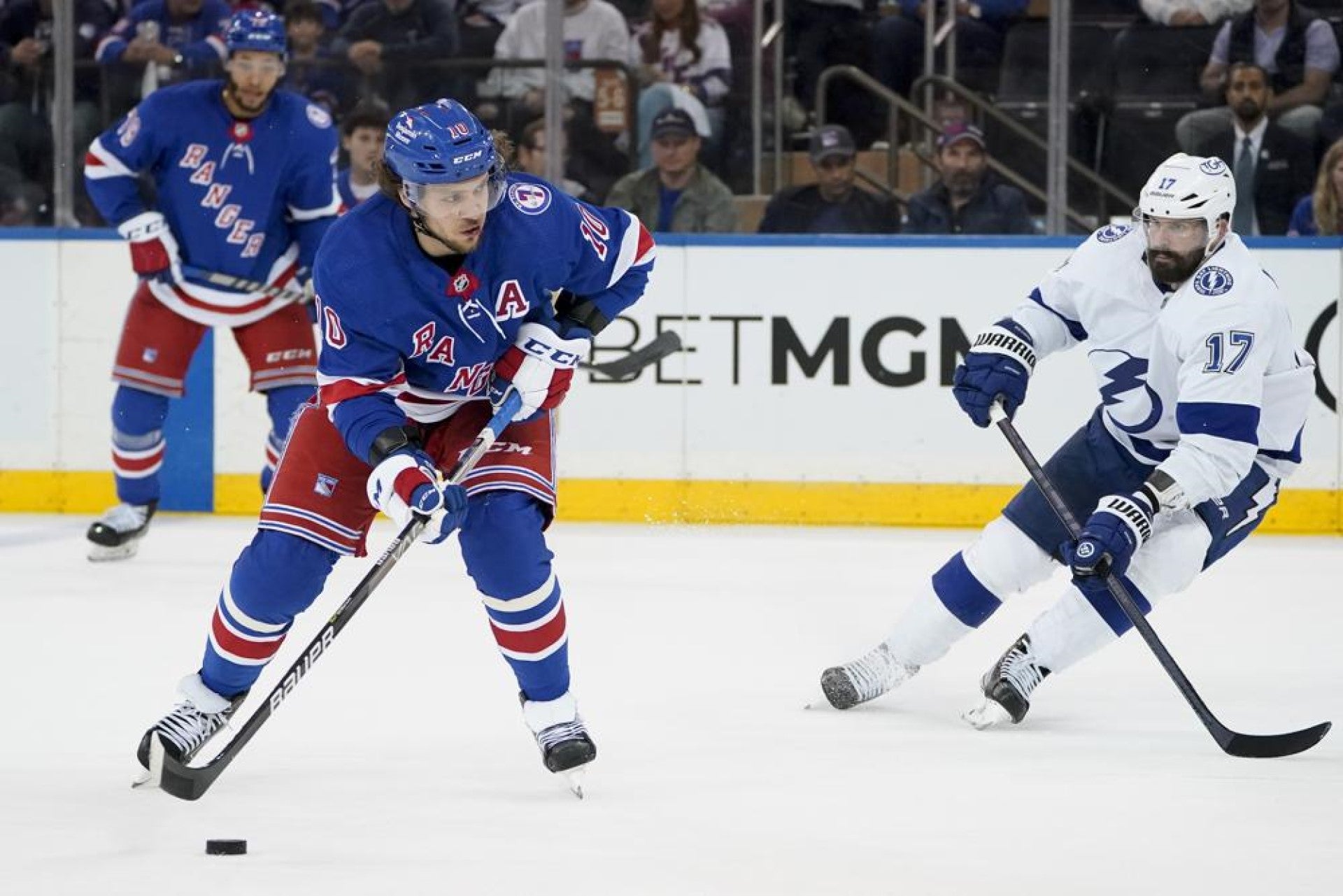 Mika Zibanejad scored in the third period, Igor Shesterkin stopped 29 shots and the New York Rangers beat the Tampa Bay Lightning 3-2 on Friday night to take a 2-0 series lead in the Eastern Conference finals.
K'Andre Miller and Kaapo Kakko scored in the first period, and Adam Fox and Chris Kreider each had two assists for the Rangers. New York won its eighth straight home game, extending a franchise playoff record.
Nikita Kucherov had a goal and an assist for Tampa Bay, Nicholas Paul also scored, and Andrei Vasilevskiy made 25 saves. The Lightning goalie has allowed nine goals in two games against the Rangers after limiting Florida to three in a four-game sweep in the second round.
The Lightning have lost consecutive playoff games for the first time in the last three postseasons. The two-time defending Stanley Cup champions were 17-0 after a loss coming in.
The series shifts to Tampa for Game 3 on Sunday and Game 4 on Tuesday night.
Zibanejad extended the Rangers' lead to 3-1 early in the third period. Shortly after missing wide on a 2-on-1, he got a pass from Fox, skated into the left circle and fired a shot that beat Vasilevskiy high on the stick side at 1:21. It was Zibanejad's ninth of the playoffs and gave him goals in six of the last seven games.
With Vasilevskiy pulled for an extra skater, Paul scored in front off a pass from Corey Perry to pull the Lightning within one with 2:04 left.
Vasiliveskiy was pulled again for an extra skater when Shesterkin had to make several sprawling saves with about a minute to go.
With the Rangers leading 2-1 after 20 minutes, Tyler Motte nearly added to it 3 1/2 minutes into the second period as his backhander trickled through Vasilevskiy's pads and was on the goal line when Corey Perry dove across to keep it out.
The Rangers outshot the Lightning 14-10 in the scoreless middle period, with most of Tampa Bay's attempts coming in the last six minutes. Shesterkin stopped a shot by Paul from the right doorstep, an attempt in close seconds later by Ross Colton, and then a deflection by Anthony Cirelli less than another minute later. The goalie also stopped two slap shots by Mikhail Sergachev about 20 seconds apart with about a minute to go.
The Lightning got an early power play when the Rangers' Ryan Reaves was whistled for slashing 2 1/2 minutes into the game. They quickly took advantage as Kucherov fired a shot from the right circle that beat Shesterkin on the glove side at 2:41. It was Kucherov's fifth of the postseason. Tampa Bay was 0 for 9 on the power play in its previous three games.
Miller tied it a little more than the minutes later on a Rangers rush. He fired a shot from the right point that was blocked by Lightning defenseman Brandon Hagel, but the puck came back to him and he fired another shot that went in off the post at 5:59.
Shesterkin had a sprawling skate save on Stamkos two minutes later on a 2-on-1 to keep it tied. Motte nearly gave the Rangers the lead with 8 1/2 minutes remaining, but his shot deflected off the goalpost.
Kakko put the Rangers ahead 2-1 as he deflected a pass from Adam Fox past Vasilevskiy from the right doorstep with 2:28 left in the opening period.
STATS
Fox leads all NHL defensemen with 17 assists and 22 points in the postseason. ... Zibanejad has a seven-game point streak with six goals and 11 points. He has 22 points in the postseason. ... The Rangers have 20 goals over their last four games after scoring nine over the previous five.
CLIMBING LISTS
Kreider has 53 postseason points, taking over sole possession of fifth place in franchise history.
Related Stories
5d ago

Gallant: Rangers to focus on their game, not Sydney Crosby and co.

Quest for the Cup: Fans excited as Rangers kick off playoffs against Penguins

Williamsport bound: Little League squad is the pride of Massapequa

On to Williamsport: Massapequa heads to Little League World Series