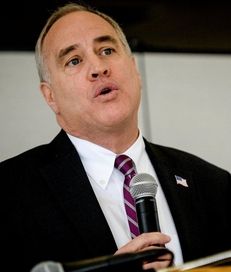 Background: DiNapoli, 64, is seeking a third full term as comptroller running on the Democratic, Independence, Working Families, Reform and Women’s Equality party lines. DiNapoli was born in Rockville Centre, raised in Albertson and currently lives in the Village of Great Neck Plaza. He obtained a bachelor’s degree from Hofstra University and a master’s degree from The New School’s Graduate School of Management and Urban Professions. DiNapoli was appointed state comptroller in 2007 by the State Legislature to fill the unexpired term of Alan Hevesi, who was forced from office in a scandal. He was elected to a full term in 2010 and re-elected in 2014. He began his government career early, becoming the first 18-year-old to be elected to office in the state when he won a seat as trustee on the Mineola Board of Education. He served 10 years, including two terms as board president. In 1986 he was elected to the State Assembly in the 16th District in northwestern Nassau County and served 10 terms. DiNapoli is single.

Issues: DiNapoli said he would continue to utilize the power of the state's $206.9 billion pension plan to force greater civic and corporate responsibility from businesses invested in the funds, including oil and gas companies, while also protecting the fund's investment. DiNapoli said he would continue to enact audits every five years of all school districts and BOCES statewide. Increased oversight, he said, is also planned for the MTA, Medicaid program, local municipal governments and of state economic development contracts. "We need to make sure that there is accountability in this area," DiNapoli said. In the wake of several high-profile state contracting scandals and arrests, the comptroller is also looking to restore oversight of SUNY and CUNY construction contracts and centralized contracts from the Office of General Services. In 2011 and 2012, the state legislature stripped the comptroller's office of oversight of those contracts. "I am going to use the power of this office to fight for procurement reform," DiNapoli said. "The public is demanding more transparency and accountability."

Dunlea, 64, of Poestenkill in Rensselaer County, is running on the Green Party line. Born in Lindenhurst and raised in Lynbrook, Dunlea graduated from Rensselaer Polytechnic Institute with a Bachelor of Science in management and obtained his law degree from Albany Law School. Dunlea is the former executive director of the Hunger Action Network of New York State, which represents food pantries across the state. More recently, he was a climate change activist with 350.org, which opposes new coal, oil and gas projects. He currently works as a news correspondent for WOOC Radio in upstate New York. Dunlea served on the Poestenkill Town Board from 1992 to 1995  and has unsuccessfully run for Congress, State Assembly and the Rensselaer County Legislature — all on third-party ballot lines. Dunlea is married with an adult son.

S: Dunlea wants the state pension fund to divest from companies involved in the fossil fuel industry and would enact a carbon tax on corporate polluters. “We need to take action on climate change,” Dunlea said. “It needs to be immediate and comparable to the effort of World War II if humanity is to survive.” Dunlea said he would repeal the state’s property tax cap and wants to create a public bank for New York State, similar to North Dakota, to provide low cost borrowing for area school boards and credit for small businesses. Dunlea said he also wants to reform the state contracting system, cut waste in the state’s economic development programs and enact a public campaign financing system. “We need an independent fiscal watchdog and someone from outside of the political system to root out corruption,” he said.

Background: Gallaudet, 67, of Bronxville, is running on the Libertarian party line. Gallaudet is the founder of BacoBurger, which sells bacon-infused hamburger patties and is a former senior vice president for General Electric. He is a graduate of the University of North Carolina at Chapel Hill and Columbia University Business School, according to his LinkedIn account. Gallaudet did not respond to several requests for comment. 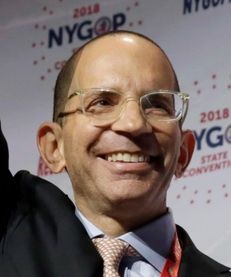 Background: Trichter, 47, of Manhattan, is a lifelong Democrat running on the Republican and Conservative lines. Trichter is a former Democratic operative who joined the Republican Party during the campaign. His party registration change will not formally occur until next year. He graduated from Emory University with a bachelor’s degree in philosophy. Trichter was a principal in the MAEVA Group, LLC, a White Plains-based firm that provides corporate turnaround and restructuring services. He previously worked as an investment banker at JPMorgan Chase. Trichter, who has never previously run for office, worked on the successful attorney general campaign of Democrat Eliot Spitzer and on the unsuccessful state comptroller campaign of Republican Harry Wilson. Trichter founded a polling institute at Pace University and served as an adjunct political science professor at Fordham University. He is married with a son.

Issues: Trichter said he would ban the state’s public pension from investing in hedge funds and private equity funds, which, he contends, have underperformed for retirees. He also would refuse to certify any state budget that wasn’t fiscally balanced or structurally sound and impose generally accepted accounting principles that are free of one-shot revenue drivers. “The state comptroller’s office has tremendous potential to fix vexing state problems including a dysfunctional budget process, increasing public pension liabilities, back door borrowing and other pernicious debt policies,” he said. Trichter said he would audit major state agencies, including the MTA, to prevent infrastructure decay and future subway concerns. “The end goal would be to uncover operational and cost inefficiencies and to discover capital budget misallocations, from state of good repair spending to the mega projects that do nothing to keep the current system running efficiently,” he said.