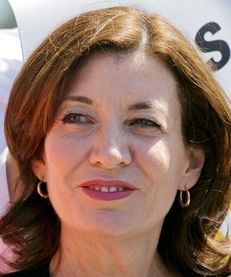 Background: Hochul, 60, began her political career as a town board member in the western New York community of Hamburg in 1995, rising to Erie County clerk in 2007, where she gained attention for opposing Gov. Eliot Spitzer, a fellow Democrat, on the issue of allowing immigrants in the country illegally to obtain driver’s licenses. In 2011, she won a special election to fill a congressional vacancy in a conservative suburban Buffalo district. But she was ousted in the next election cycle by Rep. Chris Collins. In 2014, Gov. Andrew M. Cuomo chose her to be his running mate as lieutenant governor. Earlier this year, Cuomo tried and failed to persuade her to run for her old congressional seat. She is married to William Hochul, who served as the U.S. attorney for Western New York from 2009 to 2016. They have two children. She has a bachelor’s degree from Syracuse University and a law degree from Catholic University of America.

Issues: Once considered a conservative Democrat, Hochul has moved to the left since becoming Cuomo’s lieutenant, particularly in supporting driver’s licenses for those in the country without documents. But she says she has always backed progressive issues, including abortion rights, gay rights, the Affordable Care Act (Obamacare), a higher minimum wage and paid family leave. Like Cuomo, she touts her experience as giving her an edge over her Republican challenger. She notes she led the governor’s task force on opioid addiction and was chairwoman of his regional economic development councils. Since winning the Democratic primary, she announced she wants to spearhead an effort to elect female candidates in key state Senate and congressional offices.

Background: Hollister, 29, of Rochester owns an information technology consulting firm and is a native of Rochester. Hollister started his consulting business at 18 years old from his apartment after high school. He also helped small startup businesses to flourish through a mentoring program and teaching computer skills at the local Boys and Girls Clubs. He also worked as an information technology specialist at the Rochester Institute of Technology. Hollister also volunteers in helping bring city children on wilderness excursion and a volunteer emergency medical technician, according to WHAM TV in Rochester. He is married.

Issues: Hollister said he is running for lieutenant governor because he wants to raise his family in the state, but sees obstacles in the state’s economy and the long-term lack of substantial job growth upstate. He was prompted to run by the regulations and other impediments he faced starting his own business. He ran unsuccessfully for Rochester City Council a year ago before he turned to a statewide office. “I’m running because New York is my home,” Hollister said. “My wife and I are planning for our family and we want the absolute best for our children,” he said on his campaign Facebook page. “Right now, New York doesn’t provide that.” 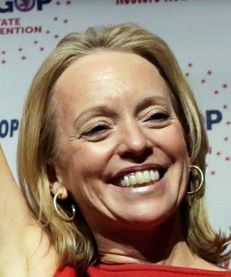 Background: Killian, 58, found her way in politics after starting in other directions. She was born in Mount Vernon and was raised there and in Connecticut. She went to the University of Notre Dame to earn a bachelor’s degree in chemical engineering and worked at a plastics plant. She then earned a Master’s in Business Administration from New York University and then spent more than a decade working as a trader on Wall Street. She and her husband, Gary, settled in Rye and had five children. She became involved in a number of local nonprofits and civic groups, including anti-substance abuse entities, and was appointed to a vacant city council seat in 2012, a post she held for six years. She twice ran unsuccessfully for the State Senate: in 2016 and in a special election in April to fill a vacancy.

Issues: Like her running mate, Marc Molinaro, Killian calls for reducing property taxes, improving infrastructure (mass transit and broadband development) and cleaning up Albany. More specifically, she has called for the state to end the practice of handing out grants to private entities, saying the state should not be “picking winners and losers,” but instead roll that savings into reducing tax rates broadly. She says too many of the state’s economic development programs have been linked to political donors. She supports a state takeover of all Medicaid costs from the counties. She has criticized the Cuomo administration’s promise to extend broadband capability as “not even close” to becoming reality. She supports a cap on state spending.

Background: Jia Lee is the Green Party candidate for lieutenant governor. She is a New York City school teacher for special education students and parent of a New York City public schools student. Lee said the state is attacking public education by failing to adequately fund schools and mandated curricula. Lee has been a special education for 17 years and a member of the United Federation of Teachers union. She was active in the opt-out movement by parents to keep their children from taking a growing number of standardized tests that measure student progress and had been used in job evaluations for educators.

Issues: In 2015 she testified before a U.S. Senate committee on what she said was the harmful effects of high-stakes standardized tests, such as those that students need to graduate. She said standardize testing has led to the biggest segregation policy since the Jim Crow days after the Civil War. “As a public school special education teacher, the curriculum I am told to teach my fourth and fifth grade students flies in direct contradiction with the realities we are living," said Lee. She also fights against the growing inequality in the state and cites the labor-backed Fiscal Policy Institute that says the top 1 percent of earners makes 45 percent more than the bottom 99 percent of New Yorkers. She said that trend is worsened by public policy of politicians beholden to their big campaign contributors.

Background: Volpe, 57, is running on the independent line Serve America  Movement. He was born and raised in Glen Cove and earned a bachelor’s degree from Hofstra University. He earned a master’s in industrial relations from Cornell University and the City University of New York, and a law degree from New York Law School. He’s now a partner at Venable LLP, where he heads the firm’s nationwide “labor and employment” practice group. He first won office in 1999, elected to the Pelham (Westchester County) town council. Since 2015, he’s served as mayor of the village of Pelham. He is married with three adult children.

Issues: Volpe, is running with former Syracuse Mayor Stephanie Miner, a Democrat, as part of the Serve America Movement, a new national group looking to back candidates separate from the major parties. When he announced, Volpe said: “I am doing this because I believe our two-party system is broken and our country and state are heading in the wrong direction. We need an independent, bipartisan and cooperative approach to government locally, statewide and on a national level.” He wants to abolish direct grants to companies, which he said too often reward campaign contributors. He proposes to overhaul mass-transit bureaucracy, implement early voting, end gerrymandering and ban loopholes that allow companies to skirt campaign-contribution limits. He wants the state to assume full costs of the Medicaid program from the counties, which he says will dramatically lower property taxes. With the New York subway system in disrepair, he calls for firing every current member of the MTA board.